Our first stop in Italy and it was a day of compromises on the journey from St Tropez.  We have had loads of warnings about the awful Italian roads: Narrow, windy, and full of bad drivers. And we already knew that the coast road from St Tropez to Monaco was not going to be fun in a big camper.  So today, for pretty much the first time in five months, we had Sally set to allow toll roads.

On the A8 we sped past the major French towns of Cannes, Nice and the Principality of Monaco. This was fine for us – we visited many years ago and found the opulence kind of vulgar really, so we didn’t miss them.  Maybe another trip when we have more time and inclination, we’ll see how the Côte d’Azur has changed in the 30 years since we last visited!

So 30 Euros later we arrive at the village near the campsite and it’s narrow and bumpy straight away – not a great omen for Italy. But there are big campervans in the same campsite as us, so we shrug it off.

A lovely van built pizza and we also enjoy a little satellite TV.

The site at Campersite Nervia is almost empty – it’s a 50 pitch campsite with a few statics too and there are about 6 other campervans.   It’s not great weather and it starts pissing down so no exploring the first night. The campsite is throwing a very loud birthday party too in it’s large function room so we sing along to the mainly English language hits until the early hours.

The next day we had a lay in and then went out for a stroll down the seaside about 500 meters away and through the town.  The promenade hosts a weekly car boot sale with tons of interesting junk to look at.

The only bummer on the day was that the whole town is littered with dog muck.  Maybe there is not a law in Italy – we’ll keep you posted! 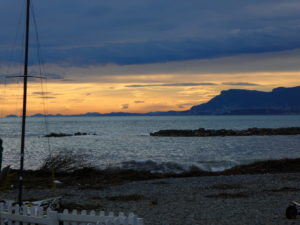 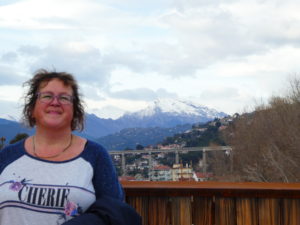