The Cote d’Azur does not seem very camper friendly.  We are out of season so most of the proper campsites are shut.  There are very few camping car aires, so we had to take what we could get.  The location we found was out in a national park, close to the Sea. The road was easy but the weather was dreadful – howling winds and pissing down so we elected to sit it out for a further night plus we both felt pretty rough – colds not shook off yet.

Anyway, in the end, the location was great, it was a mere 50M from the sea front and set among bamboo beds.

The next day and we went for a wander along the sea front and up into the national park in the hills above the camping area.  We were about 5km around the promontory from St Tropez proper and there was not much here. Apart from the campsites we found a gated community ‘Village de Pecheurs’ saying ‘go away’ in no uncertain terms so we stayed away. Unlikely to actually be any fisherman living in that place we think – it even has it’s own no drone flying zone!

Next it’s a 150km hike along the coast and into Italy! 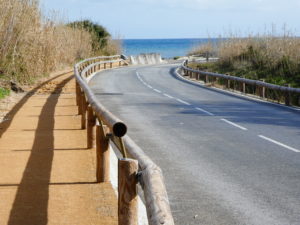 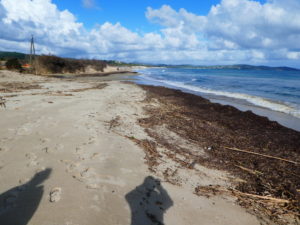