… and almost our last day in France too, and what better way to finish it off, that a bloody great steak at the Hippopotamus steak house. 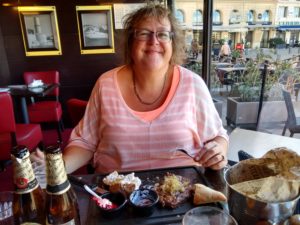 We arrived at Montpellier and a proper camp site for the next three nights. We arrived after a long drive (not many km, but still very windy so took a few hours) and got settled on the site. The colder weather and the long drives hit us both and we both lost the next day to ‘sniffles’.  Interesting as we only commented to each other a few days previously that we have not really had cold/flu since leaving blighty and we both suffer a few times a year normally. Also, it was great to have a long shower again rather than the 10 litres or so that the motorhome dishes out!

The campsite is about 8km outside town and there is a tram station very close by.  So on day two we went into town and wandered around both the old and the new town. Lunch was a burger from an independent chain and was delicious!  There is some amazing architecture in Montpellier as the few photos hopefully show!

In the evening it was a test fitting the snow chains.  We obviously never want to use them, but having them on board is mandatory on some Italian roads. They were pretty confusing but we got them fitted (and removed) after about half an hour. Snowchains: Tick.

We also had a surreal half an hour in a shopping centre.  There is a major refurbishment underway, but the centre is still open – cables hanging down everywhere, exposed girders, rough cut girder ends.  There are even pipes coming up through the floor in the middle of the gents toilets.

On a whim we tried the switching satellite system back to Astra 28.2E as we are now pretty north compared with southern Spain – and we have (briefly) a full suite of UK TV channels again.  Cool. We’ve been paying for them, but not getting them! A few UK shows later and we were binged out.  BTW – we has a different Satellite selected so we could watch the F1 on a Free-to-Air channel last year! Satellite TV when abroad is a real pain….

The next day and it was a midday departure for Marseille.  No special research lead to Marseille, but we are having problems locating open campsites or Aires in the south of France!