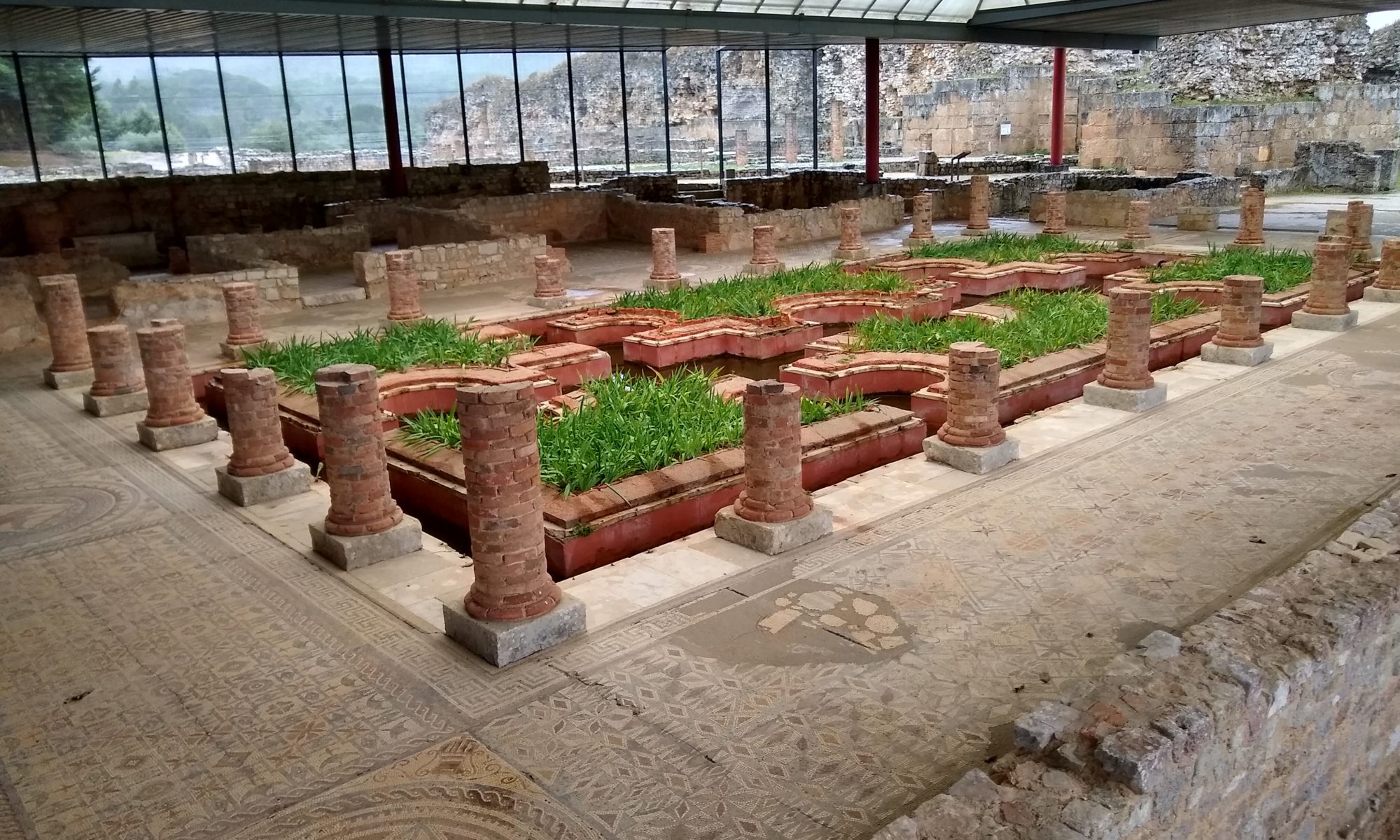 About 10km outside Coimbra: we arrived at the ruins a little perplexed – the camperstop that we planned and that we put in the sat nav was supposed to be about 2km away from the famous roman ruins that we came to see. But we actually turned up at the car park for the ruins.  It seems that this camper stop is a ‘overnight stopping is permissible’ type affair where there is not a permission per se, but they won’t turf you out. We don’t know what happened to the stop we planned to use, but this is actually quite common – most of the apps allow user submissions and user submitted updates, so data quality is sometimes not great!

We quickly got sorted and went exploring.  The weather was awful so we interspersed the indoor museum with the large ruins.  We still got very wet!

The ruins are great – the old town was set on the top of a hill and with an almost sheer drop on one side.

Prior to excavation the main above ground feature was the city wall – dating to around 3rd century.  But that wall was built on an older Roman town which in turn was built on a pre-roman town – so it’s interesting to see that the ruins have been excavated in different ways depending on whether the archaeologists were interested in late roman, early roman or pre-roman settlement.

Behind the main excavated ruins, but still inside the city walls is a grassy meadow with olive trees in, so we guess that over the next decades, the ruins may be excavated further.

Although it seemed a great location for a drone flight, the weather didn’t play ball and also there were quite a few people around so likely we would have been caught by the Portuguese drone law ‘any more than 12 people together is a gathering and must not fly near’.  A few days later – in Sintra – we met a Portuguese man flying a drone right over the top of a palace packed with people, but for now we’ll stick with the cautious approach!

His drone, like ours, is a DJI drone. They seem to be a responsible manufacturer, – the drone has built in geofences which enforce no-fly zones and also the drone uploads flight logs to DJI, so if you do anything stupid, DJI could be aware…

For any pilgrims out there, the ruins are on one of the main pilgrims paths to Fatima.

Anyway, the weather didn’t improve and the forecast for the rest of our trip down to Lisbon also seems damp, so there may be less sunny holiday photos for the next week or so!