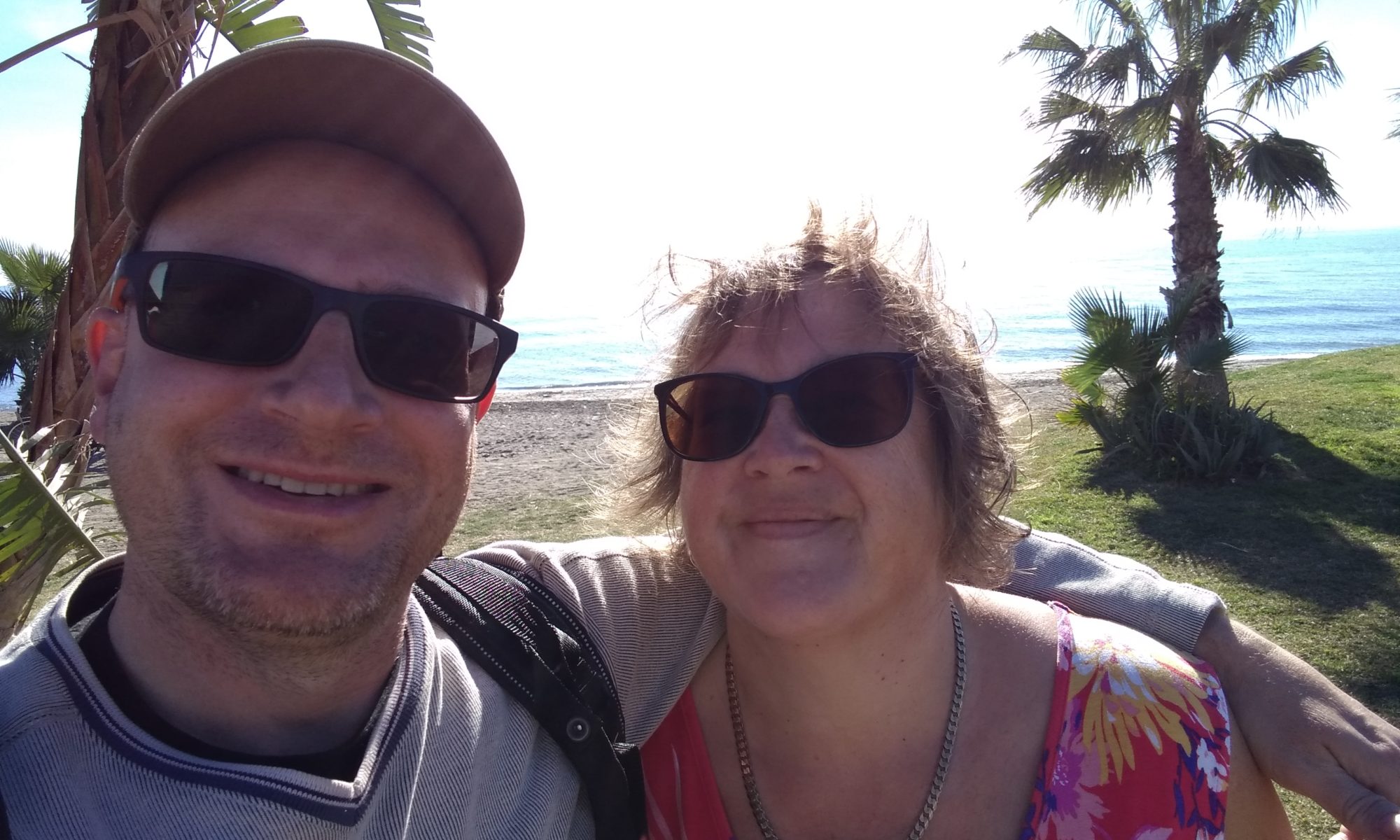 XMas – it is Málaga!  We discussed and ummed and ahhed about Cordoba, but in the end although we had a lot of things we wanted to see in Cordoba, the one municipal campsite is a ripoff at 32€ per day – no discounts, no off season rate, so towards Málaga it is!  Cordoba will wait until they have some competition for the campsite!

We should say at this point that Marbella, Torremolinos, Málaga etc have never really appealed to either of us – we are not beach holiday people – but this works well for a festivus break and there are lots of things in Malaga which are not beach related!  Malaga is considered more Spanish than Marbella too.

We arrived in Málaga around midday.  First thing on the agenda was to refill the food and drink mines which have been getting bare.

We hotfooted it to the nearest Carrefour to the motorway and this was the big one – the xmas shop!  We are talking double trolley. Every nook, cranny, cupboard and mine is now stuffed with scoff and booze. Nom nom.

We arrived at the site at about 4 PM and immediately were surprised at how full it is.  It’s a pretty new location – we learned about it from another site not from our special apps – it’s a cross between a motor-home stopover and a campsite – it’s motor-home only but does have some onsite facilities such as a shop, small bar, showers, laundry and loos,  But the price is great at only around 12€ per night with water and electric.

The pitches are a good size, but even so, it’s been many weeks since we have been on a busy site and it feels a little odd to have so many motor-homes and people around us.  By the following day, the site was completely full – no room at the inn!

The site is right on the sea front and is to the east of Málaga in a village called Rincon de la Victoria.  This part of the Spanish coast is pretty much a conurbation, so it’s pretty much hotels, bars and shops the whole way.  The site we are is in a rare gap in the hotels and apartments created by a nearby motorway and an aggregate quarry. We had a good 10KM ride along the coast – the evening was mild – coats not required.  It was after dark when we get back and bread, cold meats and cheese for dinner with Vino tinto plus a terrible George Clooney film (The Descendants).

Day two, we decided to spend the whole day on a ‘spring’ clean and maintenance.  The MS has got a little mucky after four months on the road, even allowing for frequent cleaning.  So it’s a full day emptying everything out, washing down and replacing everything and it’s a job we should not put off for four months next time around!

Day three was into Málaga town – there are cycle paths for most of the journey, but three or four km are shared with pedestrians and it’s busy, so it took a while to get into the town.  We pick up a tourist map, wander around for a couple of hours and then a massive steak and ships lunch on the harbour-side. Argentinian beef – lovely! Back to the mothership to finish off the cleaning and plan out a couple of days of tourist stuff before xmas.

Xmas eve and it was more chilling out.  T had wanted a nice drone shot of the coastline, but the Spanish drone system has areas called ‘PRZ’ where you may not fly camera/video drones.  We are slap bang in the middle of one of them! So instead we stroll the immediate area of the site and go looking for a possible xmas lunch restaurant.  One of the expat community websites tell us that we are unlikely to get a traditional turkey dinner in Málaga, which is a shame, but we are not that bothered!   Quick trip to Carrefour to top up on fresh stuff.